My personal favorite Super-Heroes are Wolverine n Spiderman! I must admit, I am not a Batman Movie fan. In fact, I even used to avoid them because it was always too dark and you couldn’t see anything properly and hence not understand it. But, All the Rave Reviews abt the Movie in the Papers/TV made me go watch this movie

My opinion abt the Movie? – The movie is grimly dark, vicious, egregiously violent and nasty – and totally engrossing! Outside of this being one of the best action/comic book movies I’ve ever seen, this is simply a great movie. The entire movie was perfect. The acting, the story, the music score, the writing, etc. The cinematography is stunning, having been shot in IMAX. All of the other rave reviews you may have been reading are not gushing for no reason either.

“The Dark Knight” isn’t simply another superhero movie. In fact, it’s really not a superhero movie at all; It’s a super villain movie! This is how a Batman movie should have been made at the first place. Complex, dark and believable. A brilliant one from Christoper Nolan. Memento (the inspiration for Ghajini) was also a very interesting movie.
For as much action as there is in this movie, it’s the acting that makes it a great piece of work. Between all the punches, explosions and stunt-work is some great dialog work. All the actors have their moments. 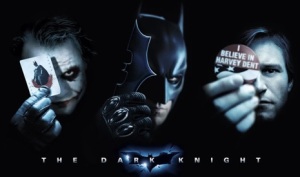 The performances by the actors are stellar. And Heath Ledger, in particular, steals the show. I was mesmerized by Heath Ledger portrayals of the Joker. Destroying an entire hospital without flinching nor remorse. Killing without a thought. Dark and pyschotic. You will really hate this guy. Heath Ledger’s performance is so spine-chilling and complete, I would not be surprised if he were to get the Oscar nod for Best Actor/Supporting Actor. Unless somebody comes out with something better. In which case, I certainly am gonna go to theatre to watch it.

Another example of perfect casting, Aaron Eckhart shines as Harvey Dent aka Two-Face. Starting off the film as the white knight of Gotham City fighting crimes and injustice, his transformation into the dreaded Two-Face gives us much to empathize with.

Christian Bale once again captivates as the caped crusader who handles Bruce Wayne’s inner turmoil more convincingly than the last film. Though he might have his thunder stolen away from him by Ledger in The Dark Knight, Bale is still effective as the conflicted anti-hero who is destined to be portrayed as a vigilante in the eyes of the public.

Back to the cinematography, this is purportedly the first full-length feature film shot entirely in IMAX. And it shows. If you’re interested, take a look at the sheer complication that went into producing the visual effects for the Dark Knight in IMAX resolution. There was such detail shown by director Christopher Nolan, and it shows.

Here are some(Yea… Jus’ some) Scene/Dialogues I loved in the Movie:

>>>Bank robbery scene. And in the robbery itself, all the robbers kill each other and only one is left standing. This is (rather predictably) the Joker. Then he makes away in a truck loaded with cash and merges into other truckers who appear from everywhere. Geth Scene!

The Joker: You look nervous. Is it the scars? You want to know how I got them? Come here. Hey, look at me. So I had a wife, beautiful; like you. Who tells me, I worry too much. Who tells me, I ought to smile more. Who gambles, and gets in deep with sharks. One day they carve her face. We have no money for surgeries. She can’t take it! I just want to see her smile again. I just want her to know that I don’t care about the scars. So I stick a razor in my mouth and do this… to myself. And you know what? She can’t stand the sight of me! She leaves. Now I see the funny side. Now I’m always smiling!

The Joker: [Rachel kicks the Joker away] A little fight in you. I like that.

Batman: Then you’re going to love me. 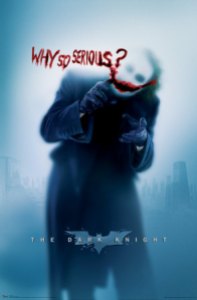 >>> The Joker: Wanna know how I got these scars? My father was…a drinker. And a fiend. And one night he goes off crazier than usual. Mommy gets the kitchen knife to defend herself. He doesn’t like that. Not. One. Bit. So, me watching, he takes the knife to her, laughing while he does it. Turns to me and he says “Why so serious?” Comes at me with the knife, “Why so serious?” He sticks the blade in my mouth. “Lets put a smile on that face!” And… Why so serious?

>>>The Joker: “If you’re good at something, never do it for free.” (Enna Thathuvam!)

>>>The Joker: I use a knife because guns are too quick. Otherwise, you can’t savor all the emotions. You know who people are in their last moments.

>>> The Scene where, Harvey is taken to the prison. On the way, the Joker tries to attack the van. And Batman comes to the rescue. Batman whizzing by in hisbatpod is supercool! The most notable aspect of the chase is a monster truck that flips over.

What people don’t really understand about the Joker is that he doesn’t even understand himself. People keep asking, “Why did the Joker give two different stories about how he got those scars?”. The answer is the Joker Himself doesn’t even know. He’s so completely insane [or supersane…read the comics!], he makes himself every day. He doesn’t Have a personality. He just goes with the flow…! And this is why he’s my Favorite Super-Villain!
Whether it’s been Romero, Nicholson or Ledger behind the makeup, and whether he’s been a maniac or a prankster, a clown or a killer, one thing has always remained constant with the Joker: the laugh — a laugh that with each breath seems to say he’s the only sane man in an insane world. 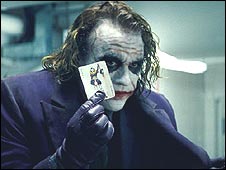 The Joker was portrayed in the film as someone who’s likable, as someone who acts as a wish fulfillment part of us. It really is the idea that within us all is that notion that if you could get away with murder, you would murder someone. I find that message to be extremely disappointing in terms of human nature, but you can’t deny that that’s what makes film interesting.

This Joker is the most thoroughly principled and incorruptible character in modern movies. He doesn’t care about money – he contemptuously burns a pile of cash containing millions of dollars — and, unlike Mr. Nicholson’s Joker, he doesn’t even care about power. He consolidates the various mobs of Gotham City merely as a means to his end, which, contrary to numerous editorials we are seeing, isn’t terrorism. Terrorists, in their hearts, believe that they are really the good guys; Mr. Ledger’s Joker has no such illusions. He’s a nihilist whose avowed purpose is to disrupt society by corrupting and destroying its heroes — Batman and Aaron Eckhart’s straight-arrow D.A., Harvey Dent.

In the most unsettling scene ever presented in an action movie, Christian Bale’s Batman is left to interrogate the Joker in a police lock-down room while the police simply watch. Mr. Ledger snickers, leers and goads Batman into beating him up — thus violating his civil rights, which is precisely what the Joker wants Batman to do. It’s a stunning victory for the villain that makes Batman seem helpless.”The Dark Knight” seems to be telling us that, ultimately, we’re completely helpless against any characters as ruthless and ideologically pure as the Joker.

“Some men,” says Michael Caine’s Alfred the Butler to Bruce Wayne, “aren’t looking for anything logical, like money. Some just want to watch the world burn.” Is the only alternative to become as merciless as your opponent? It’s a dilemma that leaves Batman in the dark.

Anyway, it’s based on a comic book series, so we should not take any of it too seriously, but it should be seen for Heath Ledger’s last great performance. Oscar?  I wish I had a vote.

With only its weaker point being the character development, The Dark Knight is without a doubt, the must-watch film of 2008. If you haven’t seen it yet, I strongly encourage you to take in this soon-to-be classic.